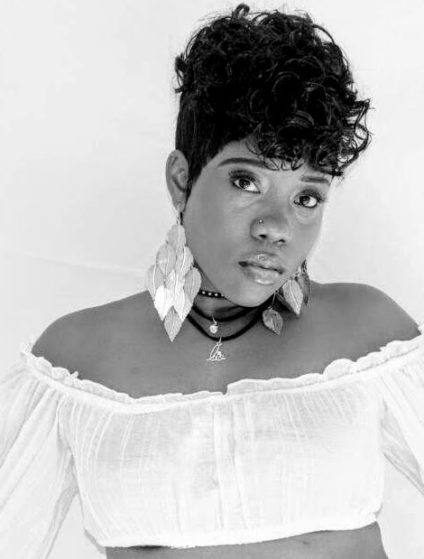 You would never be able to tell from her compact size that Tasheba Campbell would carry such a huge personality. More popularly known as Sheba Di Diva, originally the first lady of the now dispatched Gaza Empire, this hardcore female Dancehall artist is also extremely shy.

Born on February 8th, Sheba’s life has always been unexpected. After all, her mother did deliver her on the way to the Spanish Town Hospital in the back of a police car that was helping to transport her to the hospital. Sheba grew up in the harshest communities in Spanish Town, mainly March Pen Road and Ellerslie Pen. There was never a stable home or one address as she, along with her parents and little sister, resided on captured land. Due to financial strains, Sheba’s parents had to send her away to live with other relatives on John’s Road, being the obedient one, as no one wanted to keep her sister who was difficult to handle.

Eventually, Sheba had to become a woman before her time because she had to fend for herself most of the time. Her mother, who had them young, left their father who was abusive to her, therefore, Sheba played the mother role to her little sister and took care of them from the tender age of 8. She had to cook, wash, clean, get her sister and herself ready for school and be emotionally responsible for the entire family.

Music was never an option for Sheba at that age, just a hobby. Although, she did write her first children’s book at 8 years old, made out of cartridge paper. She drew the illustrations and wrote the story. Even though she had a great singing voice then, Sheba’s passion, however, was dancing and her aim was to become a computer analyst or a secretary at a front desk somewhere. It was in high school that Sheba began to gravitate more towards music where she formed a group called the “TAC Girls Crew” which included her sister. Eventually she grew out of that singing voice and turned to DJ-ing instead, which she excelled at as she discovered her hardcore side. Sheba entered competitions whenever she found herself without money and dominated every one she entered. A few times she did it to prove herself to others who tried to prove on her and still won but even then, Sheba still did not do it for the love of it; just as a convenience only.

Sheba dropped out of high school and hustled a bit using Cash-4-Gold but sent herself back to school at the H.E.A.R.T. Academy where she pursued a course in secretarial studies and housekeeping. Her current skills include hairdressing, dancing, writing, fashion designing; a true multi-talent. At 17 years old, Sheba had her first child and crashed on the way to the hospital. She thought she was going to die but believed God saved her for a higher purpose in life as they crashed in front of a church. She had a second child at 23 years old for her then fiancé, whom she was involved with for 9 years. She called off the engagement and settled down with her present common-law husband and upcoming artist, Junior Lobban, whom she recently had a child for in April 2014. In 2005, Sheba’s father was brutally murdered. It was hard for her to get over her grief as she was very close to her father. She had even heard the gunshots and felt that it was him but did not exactly know that it was her father that was being killed at that precise moment. Sheba loved her father because she grew up with and could not believe that he was gone.

It was in June 2009 that Sheba finally caught a break. A few months after falling out of the Magnum Kings and Queens of Dancehall competition due to low votes, Master Raj, the owner of Tiffany Disco, heard her DJ-ing and told her that she was really good. He insisted that she go to Big Yard on Mannings Hill Road to Father Romie who owned the studio there. Internationally acclaimed Dancehall artist, Vybz Kartel, was always hanging out at that particular studio and Master Raj knew that once Kartel heard Sheba’s lyrics, he would sign her. That’s exactly what happened. Sheba waited all day for Kartel to arrive at the studio and once he got there, she introduced herself, told him that she was a great lyricist and he asked her to perform a song for him right then and there. Immediately when Sheba finished her song, Kartel drafted a contract for her because he loved how she sounded. She calls it luck. After signing, they recorded “Gal A Wah Me Do Yuh” on the England Town Riddim which became an instant hit after its release in September 2009. Vybz Kartel had not made any formal introduction for Sheba like he did for the other Gaza girls, therefore, she was still unknown to the public, even with the hit song. It was more of an on-the-spot move and 3 years later, still no official introduction was made. Kartel basically put her out there as a mysterious artist and kept mainly as a secret weapon of some sorts. He did, however, take her everywhere he performed. Sheba’s first flight out of Jamaica to perform on an overseas show was to St. Kitts & Nevis with Vybz Kartel; then to Trinidad and Tobago where her songs were in heavy rotation.

Sheba earned 3 number one hits in Trinidad, where most of her international fans are, that aren’t popular in Jamaica. She has a huge fan base in Costa Rica and other Caribbean countries. In 2012, after the incarceration of Vybz Kartel the year before and the disbanding of the Gaza Empire, Sheba teamed up with Lesley Hayles to manage her career through the suggestion of a mutual friend in the business. Due to family situations and both conceiving children shortly afterwards, Sheba’s journey to success slowed down incredibly. However, not one to be easily dismayed, Sheba and Lesley still did whatever they could with whatever energy, strength and time they had. Now, with more time on their hands, the team is ready to take on the world. She had just returned from a month long tour of Europe in September 2014 where fans were ecstatic to finally see her. October and November saw Sheba traveling to Saint Vincent, Tobago and eventually to the United States.

Sheba released new tracks in September 2014 like “Pree Me” which features Dwayno on the World Vybz Riddim and produced by Worl Orda Production for the Dwayno Records label. It was distributed by 21st Hapilos and has been getting great responses worldwide. “Good Up Good Up” was produced by Different Medz Entertainment and is a feel-good song for the ladies. 2015 saw a somewhat revamped Diva as Sheba went on to release several singles, including “Buff Up” in June on the S.E.X Riddim, produced by Spit Fiyah Records and “Mine Mi” in September on the Flat Bridge Riddim, produced by Deal Wid It Records. Sheba then did several charity events in California, New York, Boston, the US Virgin Islands and St Martin.

Then in 2016, Sheba started voicing for Crossroad Music Group out of Sevilla, Spain with hits like “Body Good” on the Growing Love Riddim and “In Di Club” on the Rum Shot Riddim. By 2017, it has been nonstop release after release as Sheba went on to work with top producers, namely Zum of Good Good Productions and Dakrome of Dakrome Productions, with songs like “One Whine” on the Vybz School Riddim and “Tegehreg” on the Black Cat Riddim, respectively. Sheba also began working with High Stakes Records out of Germany, which saw the release of her single, “Nah Change”, her first personal track.
Sheba was then contacted by Stash Di Cash Records out of Florida who went on to produce her latest single, “My Baby”, which has already seen great sales on iTunes. The team-up brought to fruition a link up in October 2017 where Sheba and Stash went on a promotional run in South and Central Florida, hitting several events and radio stations. Currently, Sheba is working on several singles, a mixtape and an EP. Sheba and her manager, Lesley, will be going to the UK and Gambia to do a mini promotional tour in December.
Sheba lists her musical influences as Lady Saw, Lady G and Tanya Stephens but admires Spice as well. She intends on making her name and leaving her mark in the entertainment business in order to give the life to her children that she did not have growing up. However, Sheba maintains her faith in God and insists that in 10 years, she will give her life to Lord by becoming a Christian and planning to be a preacher.